Dog Found In Detroit With Ears And Nose Cut Off, Reward Offered To Find The Abuser

Shelters deal with animal abuse cases often, but there was nothing the Michigan Humane Society could’ve done to prepare them for what they saw on Tuesday.

They received a call to their Cruelty Hotline from a concerned citizen regarding an extremely abused Rottweiler who was found near Livernois and Warren on Detroit’s southwest side.

The dog’s ears and nose had been cut off, he had a stump tail, and there were lacerations to the backs of his legs.

The Michigan Humane Society has posted a photo of the dog on their Facebook page, and is desperately asking for help, offering a $2,500 reward for any information leading to the arrest and conviction of the person responsible for this cruel act. 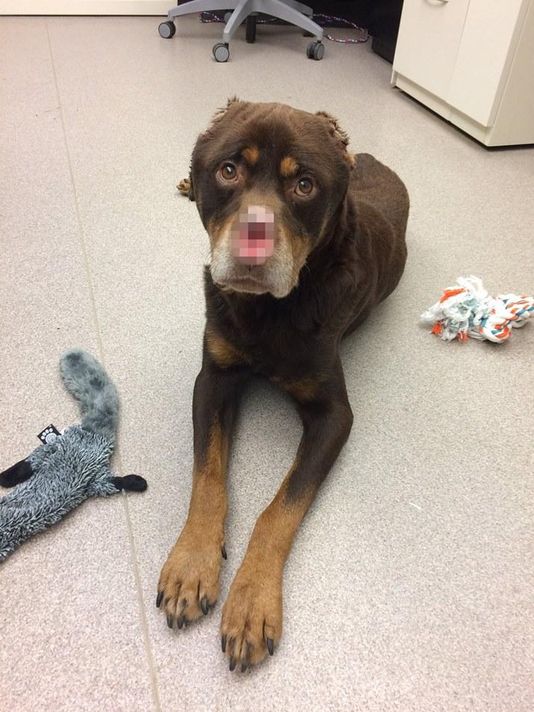 “It appears that someone purposely maimed this poor dog, which has caused it a great deal of suffering,” Mark Ramos, Michigan Humane Society’s lead cruelty investigator, said in a statement. “This kind of cruelty is unacceptable.”

The dog received immediate medical attention and is now in stable condition. While he is not yet healthy enough to be put up for adoption, they are hopeful that he will make a full recovery.

Despite the traumatic abuse that he’s suffered, Ramos says that the dog still has a positive attitude and is very well-behaved and socialized.

Wanting to give the dog a voice, they decided to name him Baron.

If you have any information on this case, please call the Michigan Humane Society Cruelty Investigation Department at 313-872-3401 to help find justice for Baron.