They Came To Eat, But Ended Up Risking Their Lives To Rescue A Dog From A Scary Situation

For some diners in Montoursville, Pennsylvania, a relaxing breakfast quickly turned into a life-threatening situation after diners noticed a strange occurrence on the other side of the road. Across the street from the diner, a dog was spotted on a second-story ledge. It was obvious the dog was stuck and in danger of falling.

“We see this and I’m like, ‘there’s a dog on a ledge over there!’ And so we are all looking, because it’s the second floor. We’re not sure how it got there, but there it was!” said Sharon Gross, one of the diners. 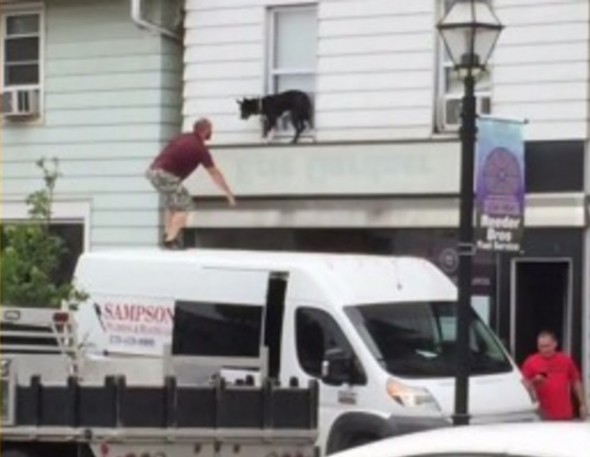 Without hesitation, two men from the restaurant ran across the street to help the dog while others called 911. The men crawled on top of their large work van and attempted to get the animal to come to them. After some persuasion, the men were able to get the dog and put him safely on the ground. Without the help of these good Samaritans, the dog would not of survived the nearly 15 feet fall.

It turns out that the three-year-old Husky mix had gotten on the ledge through a crack in a window next to his apartment’s air conditioner. His owner was not home at the time, but immediately returned when hearing news of her dog’s antics.

“He must of just pushed and it just came undone. I was beyond myself I had no idea what to think or what to do,” said Rebecca Jodun. “What do you think he was doing out on the window? Chasing pigeons probably.”

The following footage of the rescue was captured by others in the restaurant.