This Family’s New Rescue Dog Began Acting Aggressive, But His Actions Ended Up Saving Their Lives

One family’s new pet is being credited with saving their lives not just once, but twice. Patch the dog is quite the hero and once you hear his story, you will be shocked!

Nola and Richard Davis’ children had been bugging them about getting a dog for a while. Finally the parents decided to surprise their children by adopting a dog from their local shelter. They brought Patch home and the children were beyond elated to finally have a family pet. All was well.

However, Nola soon realized that the small puppy they had brought home was getting big, really big. In fact, Patch was getting so large that Nola and her husband debated on getting rid of the dog. The children begged their parents to keep their new best friend, so Nola agreed to wait a few days and see what happened. It turned out to be one of the smartest decisions Davis would ever make. 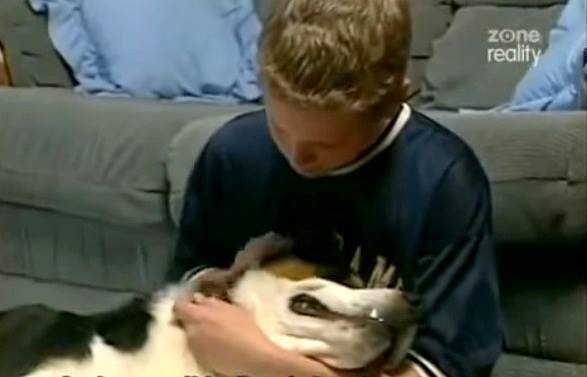 Nola was soaking in a tub, relaxing from the stress of the day when she noticed something odd. Patch, who hated the bathroom, wouldn’t leave the bathtub’s side. Shooing the dog away, Patch finally grabbed her wrist with his mouth and tried to pull her out. Finally, Nola got out of the bath and went to go check out what had the animal so upset. As she walked out into the hallway, she was shocked to find the house engulfed in flames.

Thanks to Patch’s behavior, the family was able to get out safely. As their family home burned, Nola began to run back into the home for some possessions. The faithful dog stopped Nola, not allowing her to return to the burning home. As she stopped, the house suddenly exploded.

Patch saved Nola’s life not once, but twice. It is safe to say that the family decided to keep the dog and make him part of their family forever.