Raised By Human Parents, This Hippo Literally Has The Best Of Both Worlds!

Jessica is a hippo that never had the chance to meet her birth mom. During the time of her birth, the area in South Africa that she lives in was experiencing a lot of flooding. She was born premature, and due to the floods, was literally washed away from her mother before she ever had the chance to open her eyes. The floods carried her all the way to the home of Tonie and Shirley Joubert. Shirley was the first to spot Jessica as the floodwaters carried her down the river. Jumping into action, Shirley ran from the house and caught Jessica before she could be carried any further. The result of Shirley’s actions led to an amazing relationship!

Tonie and Shirley took Jessica into their homes and raised her as their own. Thanks to Tonie’s past experience in game ranging, the duo wasn’t flying blind when they took Jessica into their home. Tony was able to produce a formula that was similar to what Jessica would have received if she had access to her mother’s milk. And when Jessica opened her eyes for the first time, the parental bond was formed. A process called imprinting, which is when an animal bonds with the first living creature it sets its’ eyes on, allowed this bond to form and stay intact as Jessica grew older. 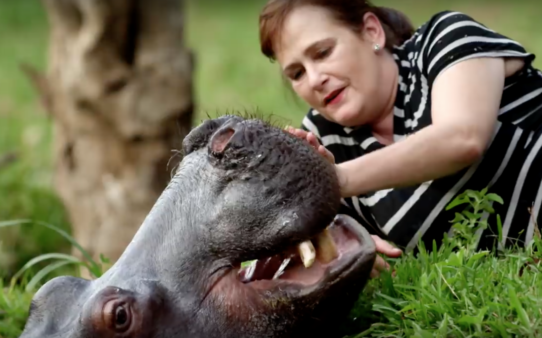 Despite being raised solely by humans, Jessica was not raised as a pet or in captivity. She has always been allowed to come and go as she pleased, something that, as she grew older, she took full advantage of. Some days she will spend traveling and interacting with other wild hippos and on other days, she is content to be bottle-fed her favorite tea and take a nap on the porch with the family dog! She’ll even go inside the house for dinner! 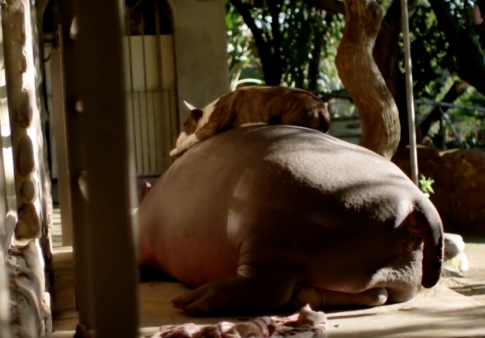 And while this family is a very unusual one, the dynamics are similar to any other family. At 13-years-old, Jessica acts like a human teenage… she goes home for the free food and when she’s done, she ditches her parents to hang with her friends!
Share on Facebook
Share on Facebook