He Was Trapped Inside A House Fire And Severely Burned. What He Does Now, Extraordinary!

This Pit bull, named Jake, was trapped inside a burning building for nearly eleven minutes when he was just three months old. Thankfully, he was rescued, but he suffered horrible burns all over his body. He was given CPR and then rushed to the vet hospital to be taken care of. The family who owned him couldn’t afford his expensive medical bills, so their neighbor Bill Lindler, who is a firefighter, adopted him. 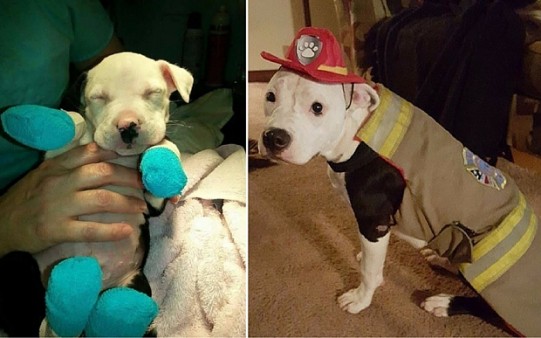 Now, not so little anymore, he received an amazing honor. The Hanahan South Carolina fire chief, as well as town leaders, decided to make Jake an honorary firefighter and official mascot of their fire department! Now he gets to ride around in the fire trucks and spends his time going to different school assemblies to help raise awareness about fire safety. Bill said one day he hopes to train Jake to become an arson detection dog.