A Man Encountered A Friendly Seal While Scuba Diving, Then The Seal Greeted Him In An Amazing Way!

A man went scuba diving, but there was no way he could’ve ever imagine what would happen next. He came across a seal who got very close to him. The diver gave him some chin scratches, but the seal kept sticking around.

He liked the chin scratches so much that he wanted more. Then he took his flipper and pulled the man’s hand toward him. He wanted belly rubs! The man began rubbing the seal’s belly, and the seal absolutely loved it. This seal was unusually friendly for a wild seal. Perhaps he was a rescue that was eventually released, so he was used to human interaction. But either way, he is absolutely adorable! 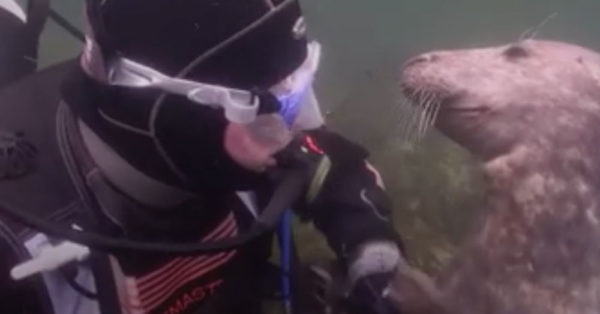 Not many people can say they’ve had an experience in the ocean like this with a wild seal. This scuba diver was extremely lucky and I’m sure it’s a moment that he’ll never forget. Watch for yourself in the video below!