It is an unfortunate reality of nature that sometimes mothers abandon their babies. For example, pandas usually give birth to more than one baby and choose to take care of the strongest one. Zoo keepers are no stranger to this fact, but they still refuse to allow an innocent baby to suffer.

One Russian zoo experienced the birth of squirrel monkeys. However, the smallest baby was rejected by its mother and would not survive the cold without its mother’s care. The zoo’s director, Tatyana Antropova, knew the tiny animal needed special care, so she came up with a unique idea.

Nicknamed Fyodor, the tiny monkey was brought to Antropova’s home and introduced to her 16-year-old cat. Rosinka the elderly cat immediately took the squirrel monkey under her care and became a sort of surrogate mother. 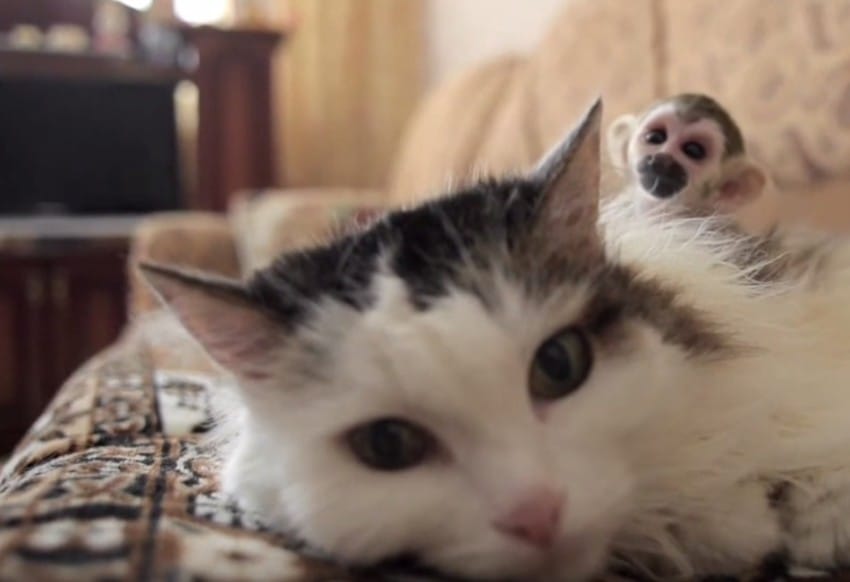 Rosinka and Fyodor became inseparable. In fact, Fyodor even rides Rosinka around the house attached to her back. Her body warmth helps regulate his tiny body’s temperature, just like his real mother would have in the wild.

Every day the monkey continues to make great strides. Antropova even says that Rosinka is beginning to get annoyed by the animal’s growing rambunctious behavior. The zoo keeper says that in about a month, Fyodor will be old enough to be brought back to the zoo. Check out their amazing bond in the footage below: